A walk through the Quartiere Coppedè, the whimsical district, is proof of how surprising Rome can be. We offer you a brief description of the district, hoping to give you a reason for a visit off the beaten path, with a professional guide or on a self-guided tour.

Quartiere Coppedè is a complex of Art Nouveau buildings, a stone’s throw from Rome’s center, built for the Roman bourgeoisie of the early 1900s. The closest landmark is Piazza Buenos Aires. Liberty is a reductive definition for these architectures that some find kitsch and others, borrowing a graceful French word, a “pastiche” effect.

Where does the name of the Quartiere Coppedè come from?

Quartiere is the Italian name for District. Actually, Quartiere Coppedèm is a portion of the Trieste district, but the result is so unique that the appellation earns it by right! The imaginative Florentine architect Gino Coppedè designed it deliberately, mixing Liberty and Art Decò. He added hints of Greek, medieval, Gothic and Baroque art and inserted frames and truss moldings that recall ancient Rome.  Coppedè was a great academic and artist and left the work unfinished due to his death at almost 61 in 1927. However, he still had time for numerous quotes, such as a delightful Roman Madonnella with the baby who invites us to explore the neighborhood. A Madonnella is a miniature Madonna in a little shrine on a street corner wall.

The Fountain of the Frogs and the Beatles 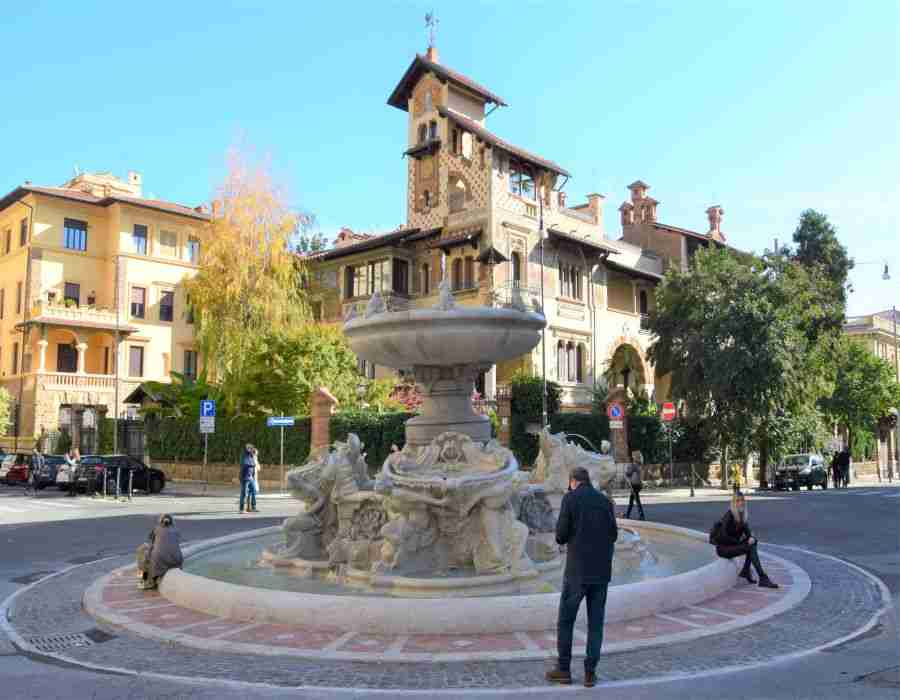 Via Dora, which opens onto the festive setting, is probably the only street in the world illuminated by a large iron chandelier. You can spend half an hour seeing the arch’s countless details that support it and connect the Palaces of the Ambassadors. On a pillar on the right, you will notice the architect’s “signature.”

After a few steps, you are in the heart of the district, a delightful Roman square in perfect Baroque style. The frogs’ central fountain is a tribute to the city center’s most famous fountains, particularly to Bernini’s fountain of turtles in the Ghetto. A few meters away, on Via Nomentana, is the “Piper” where the Beatles held a concert in 1965. They baptized with a noisy bathroom among the marble frogs. They were not the first foreign visitors to be fascinated by our beautiful fountains! 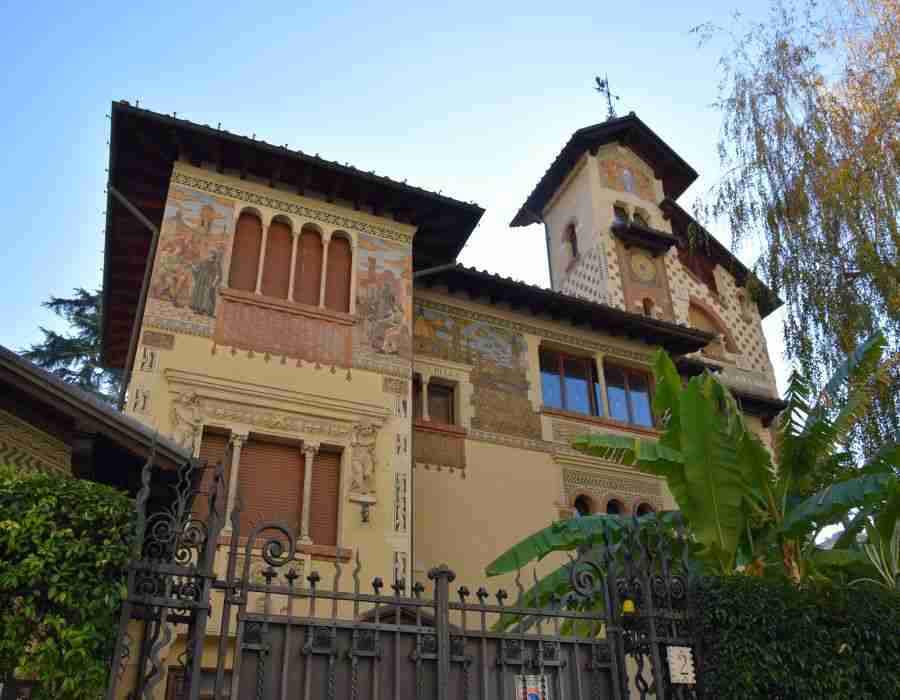 But it is by looking up that you understand why directors like Dario Argento or Nanni Loy have chosen this setting for their films. The Square is overlooked by the most bizarre inhabited buildings that one imagines, such as the Assyrian-Babylonian-style spider building and the asymmetrical Villini Delle Fate. In the first building’s decorations, the architect alludes to the industriousness symbolized by various elements and mainly by a large golden spider that weaves its web. The Villini Delle Fate, surrounded by delightful gardens, are a real work of art expertly forged with a mix of materials. The facades are frescoed, paying homage to Rome, Florence, and Venice, with immediately recognizable citations.

We have opened a small window on a little-visited place even in the height of the tourist season for those who still do not know it. Entering Coppedè, one gets the impression that Rome wants to protect it as a precious treasure chest. Strolling around, you will see richly decorated houses with symbols, coats of arms, and a riot of flowers and animals of all kinds. Bring your children and take the opportunity for a fun walk!