Taking part in “Rome at Night Walking Tour, Dinner Included,” you will discover picturesque scenes as your guide leads you through one of the most romantic cityscapes on earth.

Stepping back from the bustle of urban existence to enjoy the lesser-known secrets of this magical space, dive deep into history, and unearth stories of a bygone era. From the Piazza del Popolo to the Colosseum, these are once-in-a-lifetime experiences to share with loved ones.

Then, bring your Rome by night to a close in a typically Italian fashion, with a beautiful meal to the backdrop of world-famous monuments. Superb!

Included in the tour:

Meeting Point of the Rome at night tour

Meet your guide 5 minutes before the tour in Piazza del Popolo near the fountain of the Lions with the obelisk (a few steps from Flaminio underground station). Your guide will hold a sign with your name.

Begin your Rome by night tour with Piazza del Popolo – an elegant space in the ancient city’s northern quarters with a striking Egyptian Obelisk at its center. Once a place of public execution (the last took place in 1826), few locations are more emblematic of this splendid city.

The Northern Gate of the massive Aurelian walls sits opposite the impressive Twin Churches facing the neoclassical square designed by Giuseppe Valadier.

The Ara Pacis Augustae is a delicately adorned marble altar that sits within the Ara Pacis Museum, having relocated from the Campus Martius. Once an ancient flood plain, Campus Martius resulted in the original Ara Pacis, buried under 4m of silt deposits.

The 9 BC altar rests in its new home on the Tiber river banks and is an iconic depiction of Roman life and the Augustus family.

The famed Navona Square, an oval construction revered for Bernini’s ‘Fountain of the Four Rivers, is also the ancient setting for Domitian’s stadium. Completed in 86 AD by Emperor Domitian, the arena was home to many festivals and sporting events.

When the city market arrived in Piazza Navona from Campidoglio in the 15th century, the piazza became a heralded example of Baroque Roman architecture. Piazza Navona is the perfect stop for a walk in Rome at night with its illuminated sculptures that define the space.

A true masterpiece to admire on your Rome by night tour is the illuminated Pantheon. Once a temple, now a church, the building has maintained its religious significance throughout the centuries. Immaculately preserved and seemingly just a few centuries old, it isn’t easy to believe that the structure was finished in AD 128 by Emperor Hadrian. In the square in front – a gathering place for locals – discover a decorative 16thcentury fountain sitting beneath the Egyptian obelisk.

The Rome by night tour continues into the Piazza Venezia, whose imposing marble monument to Vittoria Emanuele II becomes ever more dramatic once the day has folded into the night. Dedicated to the “Unknown Soldier” (MiliteIgnoto), the monument strives to preserve memories of the sacrificed soldiers lost throughout the ages, never identified.

Once home to the Republic of Venice’s embassy, the piazza is the city’s central hub. Several roads intersect, reflecting its true heritage, built by the Venetian Cardinal – Pietro Barbo.

Beyond the piazza lies the Roman Forum. Day-to-day life continued unabated for centuries with many a triumphal procession, public speech, gladiatorial march, or political campaign run in its surroundings.

The Colosseum and the rich archaeological site attract upwards of 4.5 million sightseers a year.

There are few more recognizable edifices than the Coliseum: the largest amphitheater ever built, the structure marks the center of the city and neighbors the impressive Roman Forum.

The 72 AD amphitheater held crowds of up to 80,000 locals baying for blood during gladiatorial spectacles, as the man fought beast to the delight of thousands. Finally, perhaps the most impressive engineering feat in the entire country, the splendidly illuminated Colosseum, is on the top of our Rome by night experiences list.

If you haven’t had your fill of Italian delights, the tour ends in a typical Italian restaurant where guests can indulge in the finest local cuisine. Then, enjoy a starter, main course, and dessert to round off the perfect evening.

Days of Operations: Every day except 25 and 31 Dec. 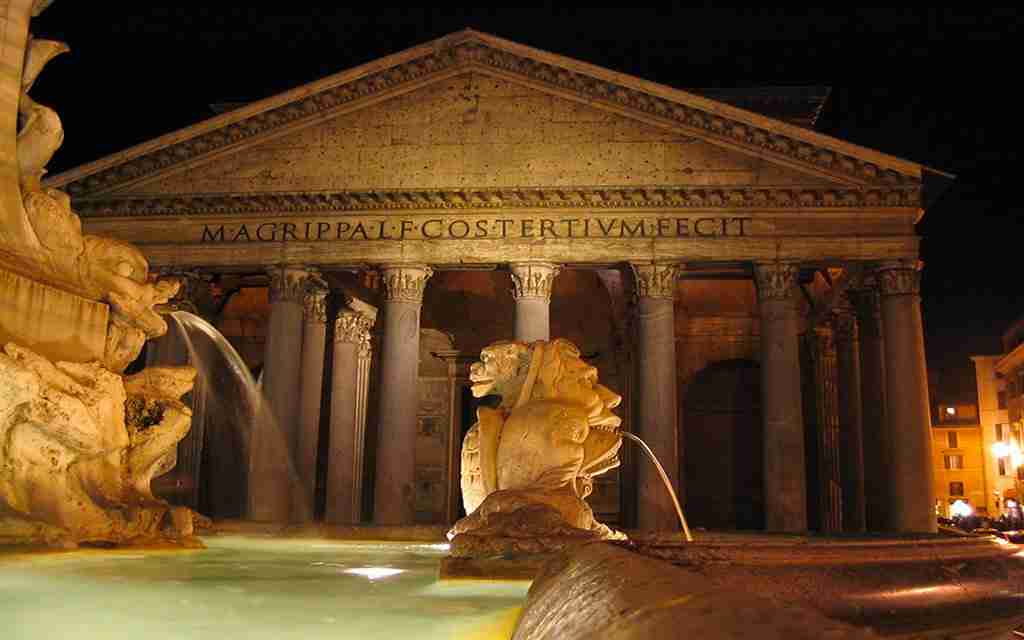 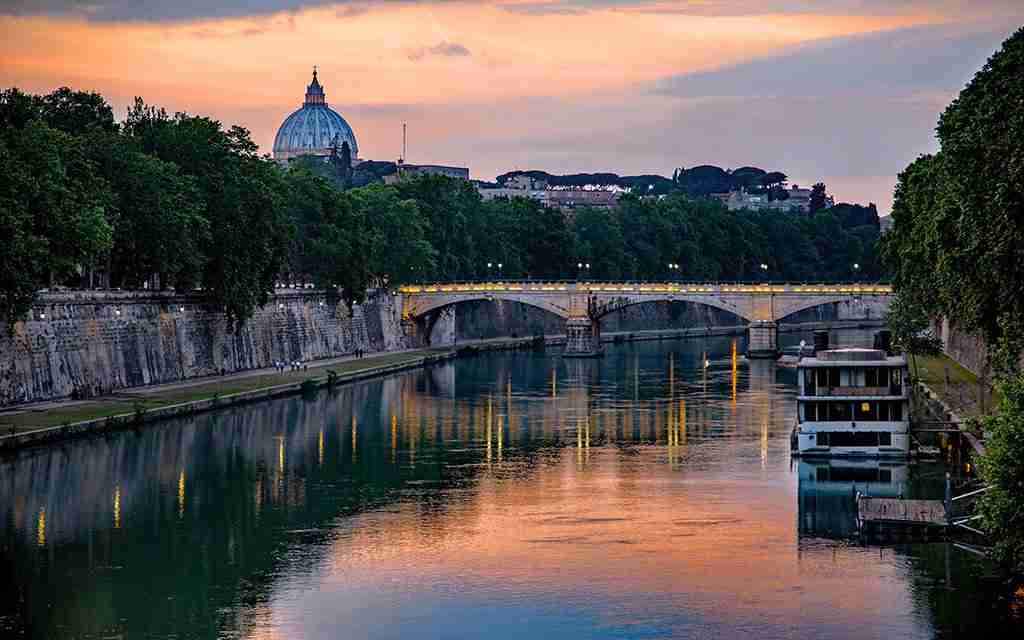 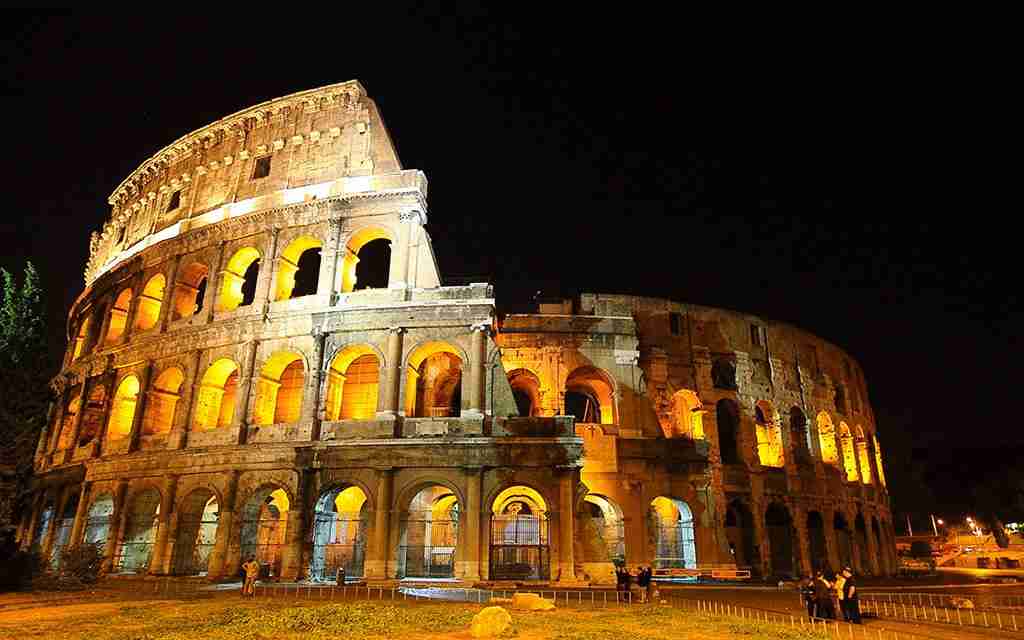 What can you do in Rome at night? Do as Romans do! Walking in Rome when it lit up in all its sparkling glory, is what they love to do before enjoying dinner at a good restaurant with the partner or friends.
We know that most of the activities must be done during the daylight, but if you have enough time to stay in the eternal city, plan a relaxing evening!

Do you want to fall in love with Rome? See it at night!

Our expert guides will deliver the best possible Rome experience. Have fun and bring home unforgettable memories strolling by Rome’s world-famous fountains and squares when the lights make it even more spectacular!